It's All About Us All Being One: A Sermon for Easter VII

This was preached on Easter VII, June 2, 2019, at St. Raphael's Episcopal Church, Crossville, Tennessee. The transcription has taken a while, but here it is at last.


So, everybody has a dream or two that hangs with them. I have one that has hung with me for a long, long time. It goes back to my college days. I was in my room in the fraternity house. I was asleep and I had a dream. And in the midst of this dream I kept seeing the number nine and it was flying past me - nine, nine, nine. It was like a Sesame Street episode gone bad. And I woke up and quickly realized what was going on. My roommate was studying. He tended to prefer to study from 2:00 to 4:00 in the morning,  and he was listening to - wait for it - a Beatles album. Perhaps some of you will quickly figure this out. What was playing while I was asleep? The album was The White Album. The cut was “Revolution 9.” And that's what was coming out of the record player: “nine, nine, nine.” Oh, but I can still see those big graphic numbers flying past me. Well I guess because I had been watching Sesame Street, too.

Paul and Silas are in Philippi. Philippi was a Roman colony and what that means is a bunch of Romans soldiers. Roman soldiers when they were pensioned out, were basically given this town and the lands around it to own, to farm as their pension plan. That's how the Roman army handled a pension plan. When a group was ready to get out, they basically gave them somebody else's land and set them up with their sort of equivalent of 40 acres and a mule.

And that's where Paul and Silas are. But in this town there is also this slave woman and she has a spirit of divination. The Greek says a Python spirit, which is to say it's the same kind of spirit that they had at Delphi because Delphi's in Pythia. So she's following them - it says many days, many days -  and always calling out, “These men are slaves of the most high God and they offer you a way of salvation.” Now, I can imagine that for the first few days, even the first week Paul said, “you know, this could be useful. We might appreciate her being our advertising campaign.” But after a while, even Paul gets tired of that, and understanding what the problem is, he finally casts out the demonic spirit. So now she can't recognize who they are and can't call out after them.

Now, we don't know what happened to her. There are scholars who want to reflect on that. It's not like she was out of a job because she wasn't an employee. She was a slave. I'm afraid they were going to find some other way to make her useful. But at the same time she had turned a lot of cash. That kind of predicting the future could be lucrative. So, her owners get angry, and when they get angry, they go to the authorities. And what they say is, “Hey, you know, we are one around here. We're all Roman citizens. We're all under Roman law. And these guys, they ain't one of us.” That was actually specious in one sense. Being Jewish was explicitly legal in the Roman empire. There were, as we will recognize when Paul writes about this later in Philippians, people of Jewish history in Phillippi.

But that's not really important.  There’s a teaching story that I'm fond of, one about the character the Mullah Nasrudin. One of his neighbors came to him and said, “I want to borrow your rope for a clothes line.” And Nasrudin said, “I'm sorry, I'm using it right now to dry flour. The guy said, “You can't dry flour on a clothes line.” Nasrudin said, “If I don't want to lend you the clothes line, it's as good an excuse for me as any.” So they had as good an excused as any. “These guys are causing a disruption.” No, they didn't claim restraint of trade. They claimed, “These guys are a nuisance. These guys are asking us to do things that is not legal for us to do, and we are one!”

They were proposing that all the citizens of Philippi were all Roman citizens. They all were accountable to Roman law. They were all ex-soldiers. Most of them or their families had a lot in common and a lot in common. This was one way of asserting, “We are one”

So, they get Paul and Silas arrested. They have them beaten, they get them thrown into jail with other prisoners, but they give them - what's the opposite of the presidential suite? They take them all the way to the deepest part of the jail. They put them in stocks.

Despite all of this, it's the middle of the night and Paul and Silas are singing and praying and the other prisoners are paying attention. They are hearing the proclamation in the darkness, in their punishment, and they are listening. And the earth moves; and every lock is broken, every chain is loose and every door falls open.

Well , the jailer decides it is better to commit suicide than to be executed. I mean, that's the calculus on this. Better take accountability for this. Otherwise, it becomes a big trial. And my family gets hauled into this. So, he's about ready to fall on his sword. And then Paul calls out, “Hang on, nobody's run away.”

The jailer goes in and he says, “Really, you're all here? Okay Lord, what do I have to do? What do I do to be saved?” After all, he's probably heard like everybody else that these are servants of the most high God who offer a way of salvation. Paul says, “Believe in the Lord Jesus and be baptized.” And he was with his whole household, and everybody rejoiced.

Now that's a very different image of being one, isn't it? Because the jailer wasn’t a Jew. He wasn't a follower of Jesus. He was part of the system that had beaten and imprisoned them.The other prisoners were not a part of them, and yet they found the singing and the prayer so compelling that when the doors fell open, none of them left, either. That is an image of being one, not because we're all alike, but because we're all seeking to be in God

So, if we're going to consider what Jesus was talking about in this prayer before his crucifixion, what does it mean to be one? Remember that he speaks of us in the Father and the Father in us. That’s a wonderful image, perhaps a compelling image; and yet often not enough in the history of the church, in the world around us, among our brothers and sisters in Christ. All too often, there's an awful lot of being one because we all agree, or because we're all alike, or because we all say the same things do it hard enough, we can be one. If we exercise enough, if we pray enough, if we….

That's not what Jesus was talking about. Those are good consequences. But first and foremost in this prayer, and in John, is the understanding that, not because we do it, nor even because we earned it, but by God's grace as we seek to be in Christ, we are one with anybody else who seeks to be in Christ - whether we like it or not, whether we know it or not. You and I are one. Jesus prays to the Father, “And now I pray for these that I'm leaving behind, that they may be one; and I'm praying for all of the rest of the people to whom they will tell the story, that they may be one - not because they're all alike but because they are in us, you and I. And because the Spirit empowers them to be in us, you and I.” Jesus prays and is accomplishing that we may all be one.

And when we encounter those folks, even those folks who are our brothers and sisters in Christ, who want to say, “I don't know. Maybe they're not one of us,” remember that. That's not Jesus’ prayer and that's not Jesus’ promise. We are one because Christ is in the Father and the Father is in Christ and we by the Spirit can be in Christ. We who all these many years later got it from themperson by person. We are oneand we can say to anybody else who would be one, “Come;” trusting that the promise is made and is being fulfilled by God in Christ, in us.

A Classic on Ecclesiastical Endorsement

As I prepare to write about the current process for ecclesiastical endorsement in the Episcopal Church, I thought I would reflect on the value of endorsement itself. That's all the more important because things have changed in professional chaplaincy in the last few years. As a place to start, I looked back at the article below. It was written by Rod Pierce and myself and published in Chaplair in November 1999. When I write about the process I'll make some additional comments about the current situation; but while I work on that, please enjoy this reflection from twenty years ago. 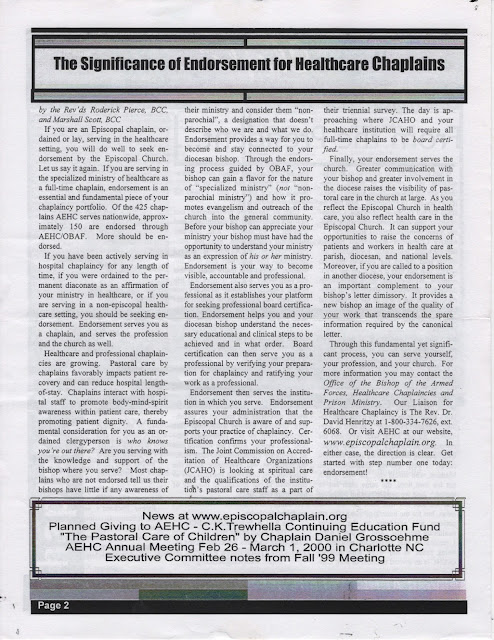 Marshall Scott
I've been a priest since 1981, and a chaplain even longer.